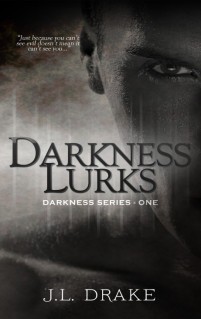 Darkness Lurks by J.L Drake
Rating: 4.5 stars
Read by Sara
Let me start by saying I really enjoyed this book. At first I was a little skeptical with only seven chapters, and how well I could get to know the characters, the plot, etc. Being an author myself I know that it takes time, and I wasn’t sure it could be done in seven chapters, but J.L did something I haven’t experienced in many books. She let me connect with the characters to people I knew, and that gave the book a special connection for me. There’s a lot of banter, and some clear sexual tension between the characters which makes it a fun read. I’m pretty young, and don’t know the police department stuff or if that’s what really happens, but in general it was very exciting and I enjoyed reading it. I kept pick up my phone so that I could read the next chapter, and my phone was dying often from it at work.  I enjoyed the different points of view to allow for an all over understanding, and the characters I found entertaining. The only thing I didn’t like was that there were too many men, in my opinion who were infatuated with the main character. I realize she’s very pretty, but adding in a guy from  a beach day, okay, someone from school,  fine, two boyfriend type deal with the cops, great, but adding in a farm hand who takes a day trip just to see her and then hangs out with her and drives her anywhere she needs to go? There’s too many guys and I’m not sure what it did for the story unless it’s shown in the later series. She’s too trusting through this experience, which almost gets her caught a few times. Just remember: a little caution goes a long way readers. Be aware of what’s going on around you.
Synopsis: Emily McPhee has struggled to overcome her father’s death…
It’s not easy, but Emily finally has the life she wants. She’s an A student at Orange University and has a comfortable home and a great circle of friends. She’s also in love with handsome Orange PD officer Seth Connors. He doesn’t seem to return her feelings, though, so she tells herself his friendship is enough.
Jimmy Lasko is a psychopath, and Emily is his greatest obsession…
Lasko knows what he wants—what he deserves—and has the deadly skills and unending patience to get it. What he wants is Emily, and he is watching and waiting for the perfect opportunity to strike. That time is coming soon; he’ll make sure of it.
A sense of unease settles on Emily, but is the danger real or imagined?
When Emily begins hearing noises and suspects someone has been in her house, Seth urges her to get a roommate. But after a search, she realizes a certain attractive cop would be the perfect choice, and Seth moves in.
Seth loves Emily, but fears his feelings might make it difficult to protect her.
In all areas of his life, Seth sees himself as a protector. He’s determined to keep Emily safe, but he pushes the captivating blonde away in an attempt to stay objective. However, after her stalker makes a failed attempt to capture her, Seth can no longer deny his feelings.
With help from Seth’s police colleagues, he and Emily set out to identify the person hunting her before it’s too late. But is it worth the risk to bait the trap with what he wants most?
Purchase Link