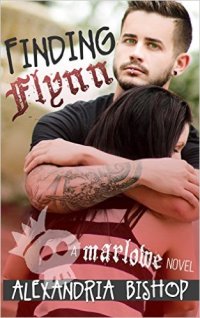 Finding Flynn by Alexandria Bishop
Read by Sara
Rating 3.5 stars
*I was given a boy for this book for an honest review*
SPOILERS
I was wrapped up in the book, I liked the music aspect, the love between the characters, and the quick romance, although at times it was a little too fast to be believable (at least to me). The mystery of Flynn’s character held intrigue and while he didn’t become a new book boyfriend, as the main character was discussing he made for a wonderful character. The book had an interesting start, and a lot of possibility, though I feel like it feel as though it fell short a few times. Sometimes it was really hard to tell who was talking, especially during critical scenes or scenes with a lot of people in them. there just wasn’t enough dialogue tags to tell me who was speaking, so I ended up getting lost a lot. The last few chapters felt rushed, as well as the relationship, they get drunk, get into an accident, hospital, then it’s all magically okay. We never really figure out what was going on between the Jax – Hudson love triangle, it’s never spelled out, even in the epilogue. So I’m left with a lot of wonders, and unfulfilled demands for the work.
The author has decided to include a giveaway for the tour! Wooohooo!
Direct Link – http://www.rafflecopter.com/rafl/display/c135151a2